When you launch Experiment.m you should obtain a window which looks like this: 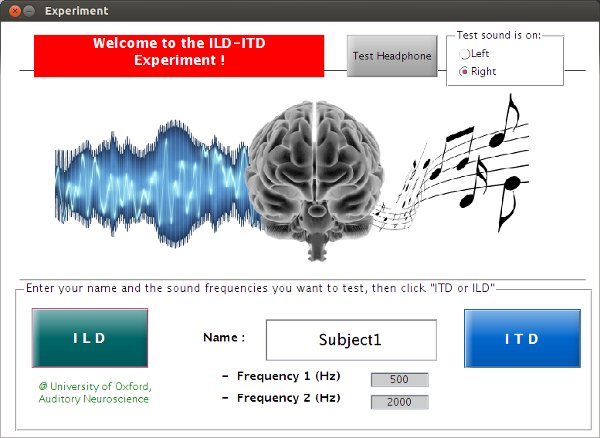 Before you run the experiment, we need to check that the computer knows which sound channel maps to which ear on your headphones. Put your headphones on and click the "Test Headphone" button on the top right of the "Experiment" window. You should hear a short noise burst in one ear only - most likely, but not necessarily the right ear. If the sound was on the left rather than the right, don't worry, just make sure the  radiobutton at the top right is set to indicate which side you heard the sound on.

Now you are ready to run the experiment. Enter your name or nickname in the box in the center (this will be used to label data file names and graphs generated as you run the experiment) and choose two sound frequencies at whcih to measure your binaural cue sensitivity. We suggest 500 Hz and 2000 Hz as good frequencies to try.

Once you have entered your values for Name, Frequency 1 and Frequency 2, click ILD to launch the first part of the experiment. Listen carefully because the first sound for you to listen to will start playing very soon after you clicked ILD.

A pop-up window will appear which looks like this: Indicate whether you heard the last sound as coming from the left or the right. Note: many fo the sounds will sound very close to the center, while others will be more clearly on one side or the other. So sometimes you may find it hard to tell. In those cases your answer should be "your best guess". That your best guesses may be wrong some of the time when the tested ILD values get small is part of the experiment.

You can indicate your decision either by clicking on the "Left" or "Right" buttons, or by pressing the Left or Right arrow keys on your computer keyboard. When you have indicated your decision for the last sound presented, the software will automatically present the next sound after a short delay, so keep listening attentively until you have completed all the trials. The software will present high or low sounds of varying ILDs in a random order. Note that, just as it is quite possible for a fair coin to come up "heads" on five or six coin flips in a row, you may also have quite large "runs" of successive sounds on the left or the right.

I personally find it helpful to rest two fingers above the left and right arrow keys on my keyboard, then listen with my eyes closed, and run through the trials in fairly quick succession. If you are doing this for the first time, you may want to do a test run of only about 20 or so trials to become comfortable with the procedure, then stop the experiment by clicking "Cancel" above, and then restart it by clicking "ILD" again on the main window.

Once you are comfortable with the procedure, run through a whole set of trials. The software will automatically generate a plot of your responses in this run. How you should interpret those data is explained in the next section.